I was a little antsy. We had walked by this place called O’neil (variations include Brasserie O’neil, O’neil Brasserie, etc.) and my beer drinker’s sixth sense drew me to the brewing equipment display in the window.

“Yes! I have found craft beer!” I shouted internally while jumping up and down, also internally.

The price of the tonnelet (keg, mini in this case) threw me at first so I didn’t stop upon first sighting, but my nightly beer craving brought me back after the wonderful dinner I prepared.

The beer list is succinct. Five beers named by color or style, plus one under development. I started with La Brune, an excellent Belgian brown ale. It’s delicately carbonated, with an excellent balance of the typical prune-y wine-like notes, malt, and hops. Of particular note was the nice touch of regular alcohol taste—I’ve had a couple Belgians with a bit too much alcohol flavor, but this beer, again, was really excellently balanced.

Currently, there are only two choices for the keg, La Blonde and L’Ambrée. Both good beers (La Brune is still my favorite of these three), but I chose L’Ambrée for my keg. La Blonde is a very light, refreshing beer with nothing out of the ordinary going on. Would definitely drink again and repeatedly, but L’Ambrée had nice hops notes, and a bit of wine-y flavor. A DIFFERENT wine-y flavor. I dunno…wine, France, drink, something…I forgot where I was going with that. 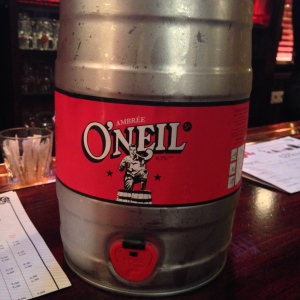 Now I’m sure you see the not-so-French name and the English on the menu, but don’t let that fool you. This place is totally French. O’neil is “just a name,” the cool bartender told me after I asked “et Monsieur O’neil est qui?” It was hopping, and I was the only tourist in there.

The most important part of all this is that there is craft beer to be drank here.

Also, this scene greeted me on my way home, situated just kitty-corner from us: